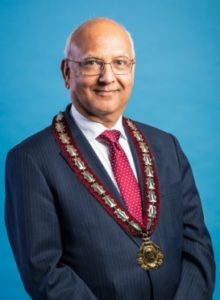 The Annual General Meeting of the West of Scotland branch took place on 14 April and featured a very personal address from the BDA’s President Russ Ladwa.

The event was for BDA members only and was followed by Russ Ladwa relating his own lived experiences of ethnicity and diversity issues and a personal account of how he dealt with these and how the BDA is working towards improving these matters within the profession.

At the AGM attendees were due to discuss a set of new Branch Rules to replace those which have been in operation since 1982. Unfortunately the number present to do this was not quorate for the purposes of amending the rules so these will be discussed at a future meeting.

The Annual General Meeting of the West of Scotland branch will be held on 25 March 2020 at the Royal College of Physicians and Surgeons of Glasgow. The AGM will run from 6.30 until 7.15pm prior to the lectures on Dental Politics and Corporate Dentistry at 7.15pm. The AGM is open to all local branch members and we would be delighted to see as many of you as possible.
The Agenda

At the AGM we will discuss and adopt a set of new Branch Rules to replace those which have been in operation since 1982.
See the Proposed Branch Rules West of Scotland 2020

The Branch’s AGM will be held at 6.30pm on 27 February at the Royal College of Physicians and Surgeons of Glasgow.

2.Minutes of the last AGM

4.Report of Council, presented by the Chairman

6.Report by Convenor of the Benevolent Fund

7. Motions or resolutions of which notice has been given. Chairman puts forward motions submitted by Council

Members of Council and, when appropriate, representatives.

(a) Valedictory Address from retiring President

(b) Induction of new President

Scottish Council met on Thursday 13 December 2018 at the DoubleTree by Hilton, Dunblane Hydro.
A minute’s silence was held out of respect and remembrance for BDA member Dr Samuel Acheampong, BDA West of Scotland Branch.

2. Meeting with the Minister for Public Health, Sport & Wellbeing
Representatives from the BDA’s Scottish Council met with J FitzPatrick, Minister for Public Health, Sport & Wellbeing at the Scottish Parliament on Wednesday 21 November 2018. The main items discussed were: the Scottish Government’s Oral Health Improvement Plan (OHIP), including OHIP proposals around domiciliary care; water fluoridation; dentists’ pay and morale; extended waiting times for paediatric extractions under general anaesthetic across a number of NHS Boards; IT strategy; and the introduction of an HPV vaccination programme for boys.

7. HPV Vaccine for boys in Scotland
Scottish Government has announced it will implement a HPV (human papillomavirus) vaccination programme for boys following a report from the Joint Committee on Vaccination and Immunisation. Although Scottish Government has confirmed that it aims to implement the programme as soon as possible, BDA Scotland is urging the Government to set out cleart imescales for implementation and include a catch-up programme for all boys of appropriate age.

10. Consultations
The BDA has responded to several consultations. Copies of the responses can be found at: https://www.bda.org/scottishcouncil-consultations

13. Arrangements for the Next Meeting
The next meeting of Scottish Council will take place on 21 March 2019 at 13:30hrs at the BDA Scotland office in Stirling.

There are two items under the SDR that PSD must action:

PSD made their calculations in the usual way, but the file used did not process correctly with the arrear payments. PSD will now make an additional payment outwith the e-schedule and it is anticipated this will be paid on Thursday 20 Dec 2018, the same date as the e-schedules are due. PSD must now gather all of their data in order to be able to process it by tomorrow evening. If this too, should fail, the arrears will be paid on Friday 21 Dec 2018. By doing this no GDP will be disadvantaged by the process failure.

Since this payment is not being made via Midas, no superannuation will be deducted in December, so PSD will take back the money in January in order to superannuate correctly. You will find more money in your account for December as a consequence. There is an added issue that the payment will fall in two separate financial quarters, but PSD will correct this in the New Year.

A letter will be issued by PSD explaining in more detail all of the above. Once payment has been made PSD will investigate why this process failed.

Here is Robert Donald’s blog, ‘Campaigning for better dental regulation: meeting the GDC in Scotland’.  This follow-up GDC meeting was held on 7 November 2018 in Glasgow.

The NHS Scotland Primary Care Dentistry in Scotland Annual Report 2017/18 has been published.

This report is the most recent of the revised format of the annual report providing an increased and more clearly structured set of information on how primary care dental services are managed and provided in Scotland, and howwell these services are operating.
It includes all the information previously provided in annual reports published by the Scottish Dental Practice Board (SDPB), but organises that data into sections more clearly aligned with the roles and responsibilities of the SDPB, NHS National Services Scotland (NSS) Practitioner Services and NHS Boards.
It is hoped that presenting the data in this way will not only be more transparent but will increase the understanding of who is accountable for what payments, activities or decisions.
The report also provides data on:
● Volumes of prior approval requests and the outcome of the approval
process;
● Appeals made to NHS Boards under Regulation 29 and whether these were
successful;
● The costs of superannuation contributions made by NHS Boards.

Please see the link below which directs you to the SDCEP Guidance on Restricting the Use of Dental Amalgam in Specific Patient Groups ahead of the new arrangements relating to the phase down of dental amalgam on 1 July 2018.

Please also see the links to the PCA and memorandum which were issued to NHS Boards on Friday 15 June 2018, about the new fees and guidance with regard to the new arrangements for the phasing down of amalgam.

The Scottish Conference of LDCs was held on 20 April 2018. Featuring a varied programme and contributions by Health Minister Shona Robison, Senior Dental Advisor Alan Whittet and Economist Steve Tidman the event focused on ‘The Past, Present and Future’.

Download the report on the Scottish Conference of LDCs 2018

The committee was concerned about the lack of early BDA involvement in implementing the plan and that a Scottish Government Steering Group had been set up without any BDA / SDPC representation. SDPC Executive Sub-committee would raise these issues at the June 2018 meeting with Scottish Government. Members welcomed the announcement that NHS occupational health services would be available for dentists and practice staff from June, and discussed how to promote the benefits of these services to the profession. Members requested that the BDA Principal Executive Committee investigate how dental services are delivered in other countries, as this may help inform discussions with the Scottish Government on the implementation of OHIP.

The committee received an update that an agreement had been reached with Scottish Government on revised fees. The Chief Dental Officer (CDO) had confirmed in a letter to BDA Scotland on 3 May 2018 that there will be two fees for resin restorations which will enable compliance with the Minamata Convention Treaty. This will comprise of a new single fee (new item 43) for a resin filling in a permanent tooth for children under 15 years of age of £18.40 per tooth. For larger fillings where mesio-occlusal and/or disto-occlusal surfaces are involved, the fee would increase to £28.60 per tooth.

3. Motions from the Conference of Scottish Local Dental Committees 2018

Fifteen motions were debated at the Conference of Scottish LDCs which took place on Friday 20 April 2018 at the Stirling Court Hotel, University of Stirling. Eleven motions were passed by delegates. SPDC members reviewed these motions and will implement a new procedure where the SDPC Executive Sub-committee will discuss the motions further at its June meeting. The Executive will then decide what action should be taken against the nine motions which became SDPC policy, and those that required further investigation. D McColl, Chair of SDPC will report on progress against each of the motions to Conference 2019. It was noted that from initial feedback, Conference had been a success.

The Data Protection Bill received Royal Assent on 24 May 2018 and came into force as the Data Protection Act 2018 on 25 May. It was noted that the BDA had issued various communications to members during the legislative process and what it would mean for dentists, including newsletters, presentations and adverts across various media. The BDA had also published a range of GDPR information, guidance and resources for members on the BDA website. Following a request from BDA Scotland, the CDO had added a link to the BDA guidance on her Twitter account.

P Grigor, National Director, BDA Scotland reported BDA Scotland was adopting a coordinated approach to this issue to avoid duplication across the committees. Similar issues had been reported in the Public Dental Service and further information was being sought. It was also reported that during the Scottish Conference of LDCs, the Chair of SDPC had asked the Cabinet Secretary for Health and Sport about the extended waiting times in some NHS Boards and the lack of response to BDA Scotland’s request to resolve the issue. Ms Robison was concerned to hear that children can wait up to six months for treatment whilst in pain and gave her assurance that if the matter required to be escalated to her office, she would personally intervene.

The Chair reported that he had met with D Felix, Dean Post Graduate Education, NHS Education for Scotland, who had indicated that he had been liaising with the CDO about a proposal for self-certification for dentists for clinical audit. This was well received by members.

It was reported that Scottish Government had received 14 returns for the Scottish Government Expenses Survey of GDPs who are 92% NHS committed, and a further 16 were in progress. A reminder had been issued on 22 May 2018 to the dentists in both the first and second tranche of the exercise. The deadline for the exercise is 31 May 2018. The DDRB report will be sent to the UK Government in mid-June, and published in due course.

9. Arrangements for The Next Meeting

The next meeting will take place on Wednesday 5 September 2018 at the DoubleTree by Hilton Hotel, Dunblane Hydro at 13:30hrs.